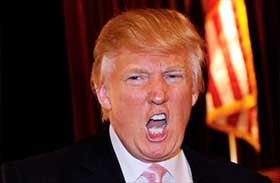 The feud began building momentum on July 18th when at a Family Summit in Ames, Iowa Trump stated that Sen. John McCain (the party’s presidential nominee in 2008) was, “not a war hero.”1 Trump further explained, “He was a war hero because he was captured. I like people who weren’t captured.”2 McCain spent over five years in a North Vietnamese prison known as “Hanoi Hilton,” where he was repeatedly tortured because he refused to be released before prisoners who were captured before him.3 McCain also spent two of those years in solitary confinement.4

On Monday Graham, who is a close friend of McCain’s, responded by telling CNN that Trump was, “becoming a jackass.”5 By Tuesday, Graham had polished the insult by telling “CBS This Morning” that Trump was, “the world’s biggest jackass.” Even “the jackasses are offended”6 by Trump’s remarks, he added.

Not to be bested, the real estate mogul shot back by telling hundreds at a rally in Graham’s home state that Graham called Trump a couple years ago “begging” for personal favors.7 When Trump promised to put in a good word, Graham gave him his private phone number to follow up.8 Trump then gave out the number and urged attendees to call stating, “Give it a shot.”9 Multiple media outlets, including CNN, ABC News and POLITICO, called the number, which was in fact Graham’s personal number.10

The quarrel has become the Republican’s worst nightmare, beginning to look more like a catfight that belongs on NBC’s “The Celebrity Apprentice” (which, coincidentally, has been cancelled due to Trump’s comments about Mexican immigrants11) then a race for the Republican 2016 presidential nomination. However, it all begs the question, was what Trump did legal?

Perhaps Graham’s strongest legal argument against Trump would fall under the invasion of right to privacy tort. This tort includes four types of wrongs.  One such wrong is public disclosure of private facts about the plaintiff.  To successfully establish public disclosure of private facts one must prove: (1) the disclosure was public; (2) the fact disclosed was private; and (3) the matter made public would be highly offensive to a reasonable person.12

Here, Trump’s disclosure of Graham’s number was certainly made publically.  He was at a rally in front of hundreds of people when he divulged the number. However, the second element is less conclusive. Usually a person’s phone number is of public record or may be found through other public records such as a marriage certificate and would therefore not be considered private.  Additionally, if Graham’s employer gave him the phone with a specific number it would be of public record. However, because Graham is a Senator he may have taken special precautions (possibly safety related) to make his personal phone number unavailable to the public.  Finally, one may argue that giving out a phone number is not highly offensive on the one hand, however, inviting hundreds (and thousands once it was reported) of Trump supporters to possibly harass a Senator on his private phone would certainly be considered highly offensive to a reasonable person.

The analysis does not end here, because Graham is a public figure one has to determine whether the disclosure passes First Amendment muster.  The Supreme Court has held that the First Amendment prohibits recovery for invasion of privacy in cases where the published (written or spoken) matter is of public interest, unless the plaintiff can establish malice.13

When determining if the matter is of public interest, the court looks at whether the disclosure is of the customs and conventions of the community (in other words, newsworthy).14 Here, a private phone number of a public figure alone is not newsworthy.  On the other hand, the argument between Trump and Graham that led to the divulgence of the number would be.  In our society it is customary to televise speeches and also report on disagreements of famous people in the media.  In fact, the feud has garnered multiple new stories daily since the incident.

Even if one could argue that Graham’s private number is of public concern, Graham could counter that Trump acted with malice when he gave it to the public.  However, Graham would have a difficult time proving malice.  Malice includes knowledge of falsity or a reckless disregard for the truth.15 No evidence shows that Trump knew the number was incorrect, in fact, he hoped it was correct telling his supporters it was the number to, “Your local politician. He won’t fix anything, but at least he’ll talk to you.”16 One could possibly argue that Trump showed a reckless disregard for the truth by stating, “I don’t know, it may be three or four years ago so maybe it’s an old number.”17 However, it could be contended that it is the causal effect of giving out a private number that is reckless, not the literal giving of a false number.

Overall, Graham would have a difficult time proving public disclosure of private facts because his phone number was probably of public record, the number may have been considered newsworthy, and Trump probably did not act with malice. However, just because Trump’s actions were legal doesn’t mean they were in good taste. It’s now up to the public to determine if he should be “fired.”