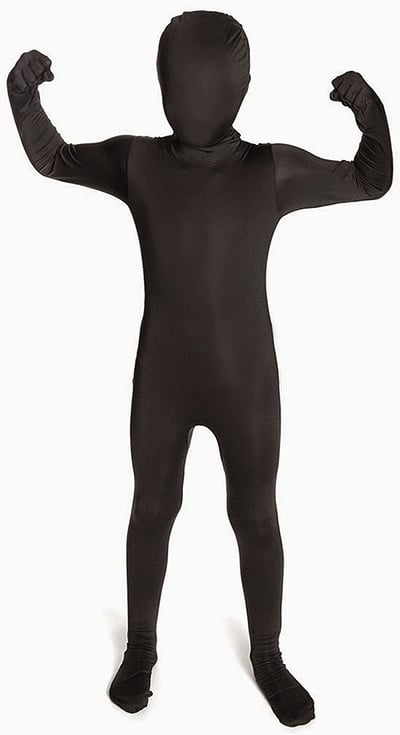 As a matter of public safety, The Lamber Goodnow Injury Law Team is asking Amazon and all online and retail sellers to immediately stop selling the ‘invisible kid costume’.

Here at Lamber Goodnow, we already believe that Halloween is dangerous enough, and it’s a night when children are already twice as likely to be hit by a car than on normal evenings.

We are also calling on Forum Novelties and makers of similar costumes to immediately cease selling these costumes and to issue a recall and buyback program.

In fact, in a study conducted by Sperling’s Best Places, kids have a greater chance of being fatally injured by a car on Halloween than any other day of the year, including Fourth of July and New Year’s Day

A brief summary of the findings include:

A Bad Idea – that only gets worse

As a public safety issue, kids dressed in the “Invisible Kid Costume” won’t be seen by drivers at night – and it’s also extremely hard to see out of the costume. We join numerous national news and media outlets to voice our concern over this dangerous trend:

We hope that manufacturers and sellers of these products pull them from shelves immediately. That said, if they are sold, not only are children’s’ lives at risk, but there are potential claims that could exist, as well, including:

Claims against the manufacturer: A product liability claim against the manufacturers of the “Invisible Kid” Halloween Costume, including “I’m Invisible Body Suit,” “Child’s Black Second Skin Suit,” and “Super Skins®” for putting a dangerous product in the stream of commerce.  Depending on the jurisdiction, either negligence or strict liability theories can be advanced as drivers will need to be even more vigilant as this costume increases the likelihood of car and pedestrian accidents.

Claims against parents: Parents who assume the risk of supervising kids who trick or treat may be held liable for allowing kids to wear the “Invisible Kid” costume and/or not providing proper lighting equipment to kids. The claim would be by the parents of the injured child or wrongful death beneficiaries of the decedent child.

Claims against sellers: Sellers who put these products into the stream of commerce may be held liable under state product liability and/or negligence laws.

Claims against drivers: Drivers who are not vigilant in looking for children and who hit a kid could be held liable as well. The critical question often turns on perception-reaction time and whether there was enough time for the driver to take evasive action.

Be Safe and Have Fun

Halloween is a night of costumes, and candy, and spooky sights – and fun! It’s also a night when you should make it easier for drivers to see your kids as they prowl your neighborhood looking for candy.

Lamber Goodnow highly recommends parental guidance for all kids trick or treating, and please use simple items so your kids are highly visible, especially on busy streets:

Common sense goes a long way – and here are some more tips to make this Halloween the best – and safest – ever: