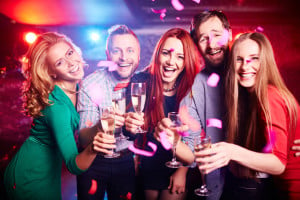 The holiday season is a wonderful time to see family and friends, and enjoy the presence of loved ones at holiday festivities, office get-togethers and cocktail parties. However, as many of us know, alcohol is a common thread, and each of these social gatherings may turn tragic with a single poor decision. Far too often, guests enjoy the party but make the decision to leave after they have had too many drinks.

Each year thousands of people are cited or killed in drunk driving accidents. The National Highway Traffic Safety Administration (“NHTSA”) reported in 2013 that 10,076 fatalities occurred because of drunk driving. Mothers Against Drunk Driving (“MADD”) explained the statistic broke down to one person dying every 52 seconds from drunk driving.

Additionally, around the holidays, the number of DUI’s and fatal drunk driving crashes increase. The NHTSA reported that in 2013, during the holiday period of December 18-31, there were 1,180 people killed in crashes on our nation’s roads, and one third of those were from drunk driving.

Most people understand that if they drive drunk they risk the chance of being charged for a DUI, or that they may even face criminal charges if they injure or kill someone in a drunk driving accident. However, many people do not realize that they may be charged civilly as well. If you drive drunk and kill a person, certain members of their family may bring a wrongful death claim against you.

In many parts of the nation, people that host parties may also be charged civilly through local social host ordinances. A social host is someone that holds a gathering. This could be as small as a two-person dinner party or as large as a company Christmas party or wedding. The social host may be throwing the party at an event hall, the office, or at their own home, the size and location are actually irrelevant.

Social host liability is a concept that seeks to hold the social host, who provided the alcohol to the drunk driver, responsible for both the physical and financial injuries that the third party suffered as a result of a drunk driver.

The best way to avoid social host liability is to not serve alcohol at your event. However, if you decide that you will be serving alcohol, MAAD suggests a few ideas to reduce your potential exposure to liability:

By being informed you can maintain the holiday’s sense of magic, keep your friends and family safe, avoid social host liability, and maintain your piece of mind.