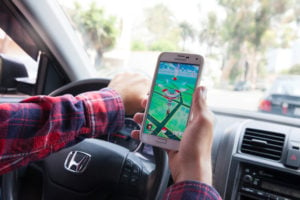 While the Pokémon phenomenon continues to transfix people all over the country, it had many holding their breath in anticipation of the first deadly accident.  “Death by Pokémon is coming,” warns Gerry Beyer, Governor Preston E. Smith Regents Professor of Law at Texas Tech University School of Law. “Pokémon users will have all sorts of accidents as they use the program while walking, biking, driving, etc.”[1]

While on the hunt Pokémon GO players have been in car accidents while driving, been hit by cars, walked into traffic, been robbed, charged with trespassing and even walked off cliffs!

Unfortunately, a truck driver in Japan has been the first person to kill a woman while driving and playing the game.  The police have said that the driver was not paying attention and hit two women crossing the street.  One of the victims, a woman in her early 70’s, died of a spinal cord injury. The other woman has been hospitalized with severe injuries.

The Nintendo mobile game, based on the popular 90’s card game, allows players to catch and train the iconic critters at real world locations.   The game utilizes augmented reality technology in order for players to explore the world around them, and to superimpose virtual creatures on the real world.  Similar to geocaching, the game requires players to actually go outside and explore locations to snag new Pokémon, visit PokeStops and gyms and add miles in order to hatch eggs.

Although the game has the upside of getting people active, precautions need to be taken by Nintendo as well as players to keep distractions, and accidents, to a minimum.

Nintendo has recently created Pokémon GO PLUS, a small device that lets you enjoy Pokémon GO while you’re on the move and not looking at your smartphone.  The device connects to the player’s smartphone via Bluetooth and notifies the player of any Pokémon nearby using LED and vibration.

Furthermore, the Lamber Goodnow legal team is taking a proactive approach to this deadly problem by mounting an online initiative to stop distracted driving. We need to take action now, as Arizona is one of only six states that do not prohibit texting and driving.  Attorney Marc Lamber has spoken out about the subject of distracted driving and its consequences here.

Other possible solutions to end distracted driving include:

It has been estimated that somewhere between five and twenty five million people around the United States are playing Pokémon GO.[2] If we are all proactive about being safe, we can stay out of the ER and continue to hunt for Bulbasaur, Ivysaur, Wartortle and the rest of the Pokémon gang.